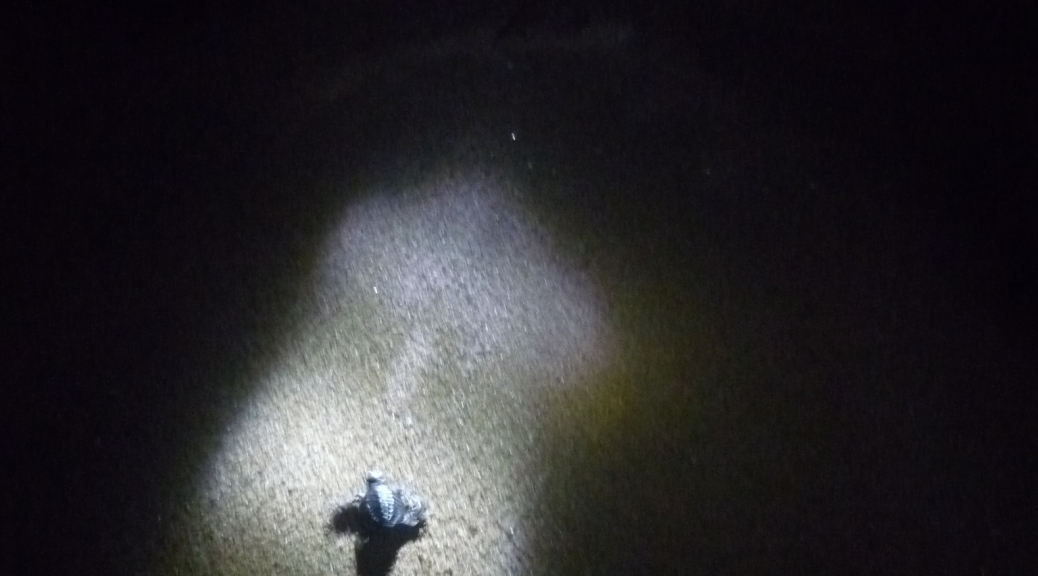 One of the things on my bucket list – ‘The Turtle walk’ : An all night trek along the beaches of the East-Coast road.. It’s more of a walk with a bunch of similar minded volunteers with a sole intention to find Olive Ridley turtle nests- and relocate the eggs to a safer location.. Among the seven sea turtle species, five have been tracked in India during their breeding seasons between December to March. Among them, the Olive Ridley turtles: famous for arribadas or mass nesting are found along the Coromandel coast in large numbers.

We had booked a slot for ourselves on a fine weekend and traveled to Chennai to be a part of this volunteering and to learn more about these turtles. All the volunteers had gathered at the Neelangarai beach by 11.00.p.m where we all had an interactive session with the organisers which enabled us to clear all our doubts about these reptiles. The walk started at around 1.00.a.m as we were told that most nesting happens late at night and leaving later would allow us to find more nests which we would miss out if we start early.

As we kept walking, suddenly someone found a baby turtle in the dark. We were all excited and began to look out for the nest where there was a possibility of finding the other hatchlings. However, we couldn’t find any, owing to the dogs that could have eaten them up or the babies would have already swam into the sea.

The sea turtle hatchlings always walk towards the brighter side(usually sea water in normal conditions). Hence, we had to switch off all the lights we had and just one person stood in the water holding a torch, which the baby followed inorder to reach the water. It was amazing how these babies find their way into the sea and it is disturbing to know that due to modernisation, the cities/land is getting brighter and these turtles are walking towards light(township) and becoming prey to several factors.

We then continued to walk.. We found so many dead turtles(which reminded us of the brutal fishermen, ship propellers which pose a great threat to the turtles), pufferfish(Fugus), cats, cuttle fishes etc. along our way..

We walked and walked and could not find a single nest. It was already 02.00.a.m and time for the fishermen to venture into the sea for their daily vatch. We crossed numerous hamlets along the coast- most of them were extremely filthy where the fishermen were pooping in the water, staying insensitive to the number of people walking there.

And then.. We reached Besantnagar Beach- the end point of our trek. We were all extremely sad that we hadn’t found any nests- the sole purpose of us going all the way from Bangalore was not met 😦 Just as we were all about to depart, the organiser got a call from a volunteer who had reached there much earlier. They had found a nest: Right there, under a pull cart, in the dirty sands of Besantnagar beach: ‘Thank God.!!’ was the first exclamation from all of us. It was followed by a ‘WOWWWww’ 🙂

The organisers will keep an account of the depth, width, temperature and the distance of the nest from the high/low tide; create a similar incubation atmosphere in a safer location/artificial hatchery. Then, let all the babies into the water when they hatch out after about 40-45 days. It is amazing to know how these turtles come back to the same place where they were born, after about 12 years for breeding. These 12years are called ‘lost years’.. It is still unknown what happens to these turtles for those twelve years in the sea.. Yes, Radio tagging has lately been in use to study these hatchlings once they enter the sea on their maiden swim which is still an ongoing subject of research. So, Yes! These hatchlings are going to return back to this same place where they were born only after 12 years, and that time, to start yet another generation of turtles..!

Of late, there are a few more places across India promoting conservation of sea turtles. You can be a part of it too at places like Chennai, Orissa, Ratnagiri, Andaman Islands etc. When are you planning your beach trek? Keep me posted 🙂

One thought on “The Turtle Walk in the beaches of Chennai”

You wanna give me hugs or bugs?? leave them here.. Cancel reply