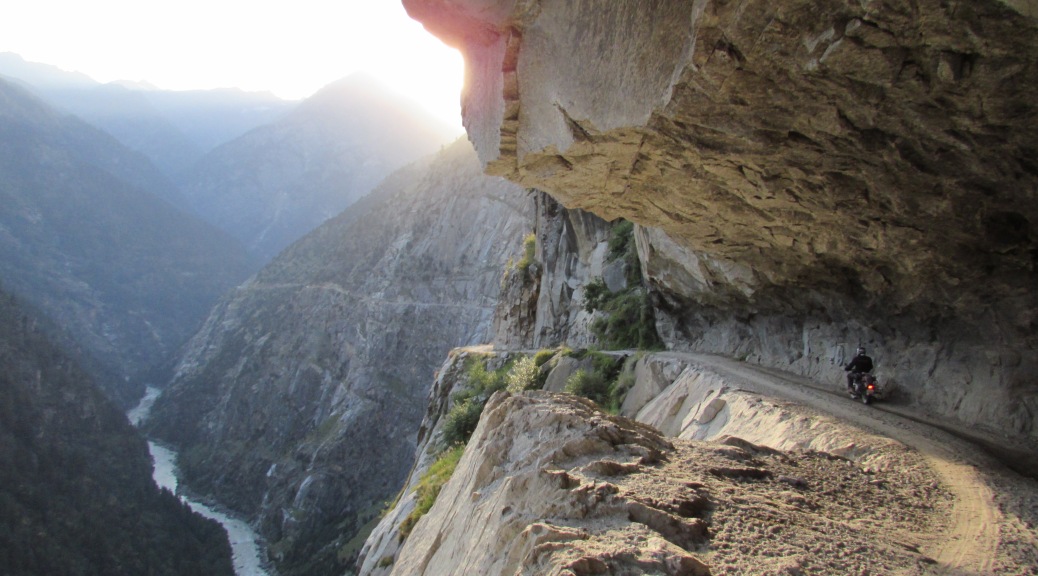 It was post sunset, a meagre road carved out of the sapphire hills with about 75deg. gradient, no aid of streetlights and just the growling sound of the flowing Chenab down the deep valley to keep company. We had absolutely no idea of what the surrounding looked like and we had started our ride with only a rough visualization of the dangerous geography based on what we had heard the people say before we left Kishtwar. We thugged the cliff with our concentration impounded to just the meter wide area lit up by the single headlamp, being cautious of the biker leading and an eye on the rear mirrors to ensure the one behind is on safe track, avoiding hundreds of potholes and still falling into few more, crossing several waterfalls that cut our roads, landslides, missing narrow encounters with the cattle that stayed overnight by the narrow roads, freezing temperature and all those things adding to the ruggedness of the terrain, we had finally reached Gulabgarh at 09.00.p.m. The thought of inching every mile still gives me goosebumps. While the makeshift army tents at the Gulabgarh stadium hosted the men of this entourage, the women participants were given a comfortable hotel room for the two nights that were scheduled to be spent there. After a nice meal cooked at the army camp, all the riders crashed for it was going to be a long day to follow.

After a hard night at the camp with pounding rain and thunderstorm all night, a new dawn brought with it the most anticipated part of the trip… Everyone was up early while the distant peaks were still being painted by early snowfall of the season. The camp site looked beautiful with green and white peaks surrounding 360deg. After a quick breakfast and farm fresh apples being served, all the riders assembled in the stadium for the flag-off. The amassment of so many machines in the middle of the mountains was one hell of a sight to watch and the wham from the exhausts sounded like medley to the ears. And then, by dispersing in a disciplined single line, the ride to one of the dangerous roads in the world through Gulabgarh-Sansari-Killar along the Paddar valley was kick-started… literally!!

Thanks to the BRO- Border Roads Organisation, there is at least a rudimentary path for transportation here that connects people in the valley. It is impossible to picture how life would have been for these settlements (villages with as less as 2 houses) that are nestled in the remotest corners/cliffs of these mountains. And the basic healthcare and trade is unimaginable to think over when even this road is cut-off in the winters due to snowfall! With a neat asphalted tarmac ending after a 3 km stretch, the challenge ahead unfolded stage by stage. The road got narrow just enough for one vehicle to pass at a time and we were cornered at several junctures to make way for the 4-wheelers that ferry people across this highway connecting the states of J&K and Himachal Pradesh. The innumerable waterfalls cascading on to the road, slush puddles, stone laid roads were the easiest stretches that we rode on. As the ride progressed, we had the mighty cliffhangers to keep our excitement hanging onto. It became less of a road and more of a trek route to ride on with absolutely nothing apart from a worn out pathway… Further ahead, laid a road that descended and ascended with very steep gradients coupled with blind curves. After riding through the outrageous cliffhangers, foot bridges across rivers, meandering forests and unexplainably beautiful vistas of the valley, we arrived at the Gannaur or Sansari bridge at the confluence of river Chandrabagha and Sansari nallah- the last point of Jammu & Kashmir on this treacherous road at sunset time. There is a police check post at this point for those wishing to cross the state border towards Himachal Pradesh. There-on, the valley will be called as Pangi valley.

The sun had started to set which meant there was no time to waste and we had to head back to our camps ASAP. We had to cover as much as possible of this treacherous route while there was still decent visibility. The familiarity of the terrain helped us catch some speed and stability for our return ride to Gulabgarh. What took us about 4-5 hours on the onward ride to Sansari was done in less than 3hours on the return. We had ripped the roads and made it back to our camp just at twilight! That was one hell of a ride I tell you… Quite literally!

This trip was part of our ‘Peace ride’, sponsored by Jammu tourism as a part of the Himalayan expedition to promote tourism in the lesser explored places of Jammu. The route we covered over the week was Jammu-Mansar-Basholi–Sarthal–Baderwah-Kishtwar-Gulabgarh-Sansari-Gulabgarh-Patnitop-Udhampur-Jammu.

4 thoughts on “Riding on the sapphire valley- Paddar”

You wanna give me hugs or bugs?? leave them here.. Cancel reply

Follow The Lost Lander on WordPress.com
Join 2,642 other followers