Biriyani is one dish that needs no introduction. Although the earliest roots of Biriyani can be traced back to middle-east, Biriyani was brought to the Northern India by the Muslim rulers who largely settled there and the Arab merchants who came to the southern India for trade. Today, Biriyani is more of an emotion for every foodie. Hence, an essential part of Indian food culture. Anybody visiting India has one thing to strike off in their list of ‘To do in India- Eat Biriyani’. But, India is a country of diversity and in no way can the humble Biriyani be left behind without being different.

While Biriyani is a very generic moniker for this spicy, aromatic and delicious preparation of rice, it comes in various forms. These forms are born out of the local influences of available ingredients, regional cuisine, rice variety and flavor preferred. There are mainly 2 types of making it: Kucchi (Raw marinated meat is cooked together between layers of raw rice) and Pakki (Meat and rice are separately cooked with all the spices and served together). While Biriyani is predominantly a non-vegetarian dish, it has been over time tuned for the vegetarian masses. Some versions are named after the place it originated from and some are synonymous with certain families or shops that created the variants.

So, while you enjoy exploring India, here is something for you to try out at each of the 29 states of this huge country- Biriyani.

PLEASE NOTE: There are a few states in India where I have not yet visited and hence do not have sufficient information about the local Biriyani flavours. It will be greatly appreciated if you can help me fill up these empty spaces by dropping your suggestions in the comments below. 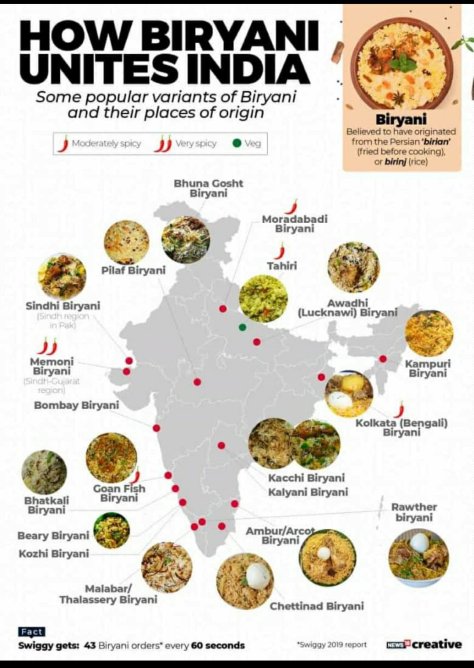