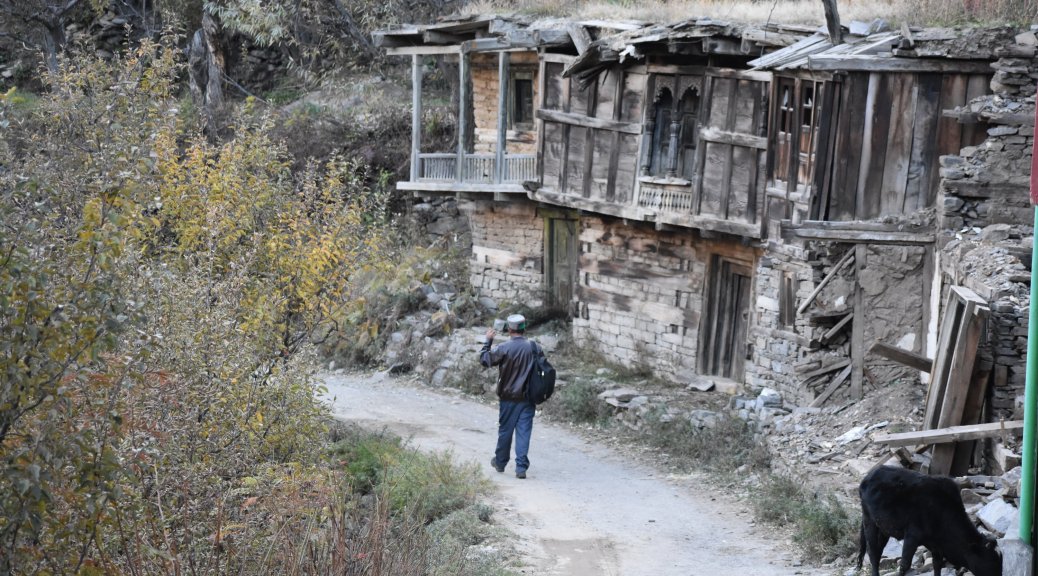 That morning, I had arrived at Reckong Peo and already done 4 rounds of the main road in the town with my heavy backpack, an uphill climb and down. I was searching for a hotel or a homestay. The only one that I found near the bus stand was out of my budget. I enquired with a few in the town and they suggested me to go to Kalpa. Kalpa is around where, all sightseeing places are situated and has a range of options to stay at. Accordingly, I sat in a local tempo traveler and started my ride towards Kalpa.

A narrow winding road, lined with apple trees on both sides with golden foliage, finally took me to a seemingly small town. The conductor announced: “Kalpa, last stop!” with narrow cluttered lanes, shops and eateries inside small sheet moulds, houses tucked behind high rise stone walls- the town looked very old school. Imagine a quaint town overlooked by the beautiful mighty mountains.. for me, it was a moment of ‘awe’ at first sight. I enquired with a few shops at the bus-stop for my stay and they guided me to walk further inside the village. I found a good one and the hotel was very new. So, the clean room, warm blankets and 24×7 hot water were just perfect for me to settle in there. But what lured me the most to the hotel room was the view from the window. Kalpa is very famous for its apple orchards. I was there towards the end of the apple season and so all the leaves were just about to shed their golden leaves. So, imagine a golden stretch against a background of white Himalayan mountains? I was mind blown!

My stomach was growling, and I fed it with Paratha at a small restaurant opposite my hotel. The lady running the eatery was quite amused to see a lone girl who had travelled so far. She enquired about myself and asked me to return in the evening after I had finished my sightseeing. “I am busy attending to customers, come in the evening when both of us are free, let us chat up and spend some time”, she said.
I walked down the alley to the only Buddhist monastery I had seen in the entire trip thus far. It was a very small one compared to all the other ones I had seen in Ladakh or back home in Karnataka. But irrespective of their size, Buddhist monasteries always have their own charm and pull. I lit a couple of incense sticks, rolled a few prayer drums and sat there for a few moments watching the mountains in silence before continuing my walk further, randomly through the alley.

I stopped along my way to ask a man across a fence, for directions to Roughi village. He was working in his apple orchard, busy getting the fruits harvested. He called me inside his farm and enquired where I wanted to go. He told me that my destination was 6+kms away. It would be difficult for me to get a vehicle at that time. I said I was Ok to walk the way as I was more curious in exploring the place. He was quite surprised when I asked him if I could help in plucking the pome. After a while, he handed over a packet full of apricots when I began my hike towards Roughi.

The walk and the scenery are best, only when witnessed and cannot be expressed in words. Only little would my limited photography skills help. I quickly made friends with a dog at a random house along my way. The dog accompanied me, and the owner let it come. Re-iterating again, the view was unbelievable. The stretch of road happens to be one of the steepest and I tried to take a peep down the deadly valley below. I pulled myself back after my head went into a tizzy. The dog continued to walk when I walked and stopped when I paused for a photo. There was a point when he was tired and panting and I had to make a bowl out of a plastic sachet from my bag for him to have some water. That said, we together reached Roughi village just after noon 😊

Beautifully groomed orchards, the suicide point, a quaint village in the foothills- Roughi was a warm tiny settlement with nothing very specific to do. After wandering around for a while, I made friends with a few kids who were returning from school, ate a few fresh apples from my bag that I had been received from random passersby on the road and finally settled down at the village entrance, hoping to find a ride back. I was all alone on the road. I spent almost an hour waiting and I was losing my patience as well as fearing the cold that would be brought in by the setting sun. There was no way I could stay there because I had dropped off all my essentials in the hotel in Kalpa itself. I started to walk rather than waiting there. After covering almost a mile, I heard an engine from behind. I turned back and waved them to stop. It was a couple in an Alto car, heading towards Reckong Peo. They obliged to drop me off along their way.

There was still time for sunset, and I thought I could use the daylight to explore the lanes of Kothi village. Although I aint a trained architect, the structure of the ancient Kalpa fort was something that I loved. I walked down through the villages, spoke up with inquisitive villagers, visited the chandika temple and finally settled down at the viewpoint to grab the golden hour of the setting sun over the Kinnaur Kailash mountains. I had seen the mountain from the rear side at Sangla. Now here I was, experiencing the moments of tranquility, in front of one of the holiest destinations of Lord Shiva. Believers who cannot make it to the Kailash mountains in China come here. Hence, Kinnaur Kailash is believed to be the alternate abode of the Lord.

As I was admiring the sight and capturing it in my DSLR, an old Bengali couple identified me as the one who had taken some nice photographs of them at the Kamru fort in Sangla, a couple of days ago. They asked me for a favour. They asked me to zoom into the peaks of the mountains with my camera and show them their deity… I was perplexed and asked them what it was. They explained……. “To the left side of the mountain was the Shiva Linga and right side was his consort- Parvati”. I was quite amused at hearing this and tried to capture images of both the manifestations with my camera. When I showed the images to them, to my utter surprise- they both started jumping and screaming and clapping with joy. They both folded their hands in front of my camera screen and chanted their prayers. Next thing I saw was the lady kept her palm on my head and saying, “We were saddened that we couldn’t get a closer view of his manifestation even after travelling this far. You showed us our lord! May he bless you with all the best and happiness in the world”, they wished me a good future. For me, it was quite an experience. I was unsure if I had to call it their innocence of praying the camera or admire their faith that had brought them this far. But I was feeling very good about myself that I was able to bring so much joy to someone. I was feeling an inexpressible emotion from within.

As the sun went down, my jaws started to chatter in the biting cold. I rushed to my room, warmed up myself with the thermals I had and stayed indoors until I felt comfortable. Around 7.00.p.m., I decided to step out to meet the aunty running the restaurant just outside. She said she would be free after closing the shutters at 07.00.p.m. I had carried millet Rotis from home which I thought I will share with her while buying some curds from her to make a dip for my rotis. She was excited at seeing me and called her family members to meet me. The restaurant was only an extension of her house, separated by a closed wooden door. Hence, she took me in and showed me around how traditional Kinnauri houses looked in Kalpa. We were back in the restaurant, chatting up over a hot glass of chai that she made for me. I gave her my rotis for tasting and she made me pulkas for supper. I returned to my hotel after a good couple of hours with her.

The next morning, I woke up early to catch the bus to my next destination, Nako. I grabbed a quick bite of bread omlette at the restaurant before saying a goodbye to my new friend at Kalpa.