Not in my wildest dreams had I imagined that I would be waking up for a new year in a place so new! Never had I imagined that I would be waking in Odisha for a new year. I did not have an idea even until the evening of 31-Dec-2020. It was a spontaneous decision to proceed with our journey from Bastar, Chhattisgarh that late evening. We decided to cut the driving time to reach Vishakhapatnam, by covering the distance by night. We chose to stop at any good hotel that we would come across along the highway for the night’s halt. It being the New Year’s Eve, we were okay to catch some sleep in the car itself in any eventuality of not being able to find a good hotel.

Anyway, the National highway was patchy for most of the way and the night driving kind of got annoying with several trucks and enormous amounts of dust in the atmosphere. Hence, we decided to halt and settle down after finding accommodation at a highway side hotel in Jeypore. With the Covid-19 related curfews around, there was no pomp, no party or toast for the night of the new year and we all surrendered to the sleep gods for the night! However, before falling asleep, my brother and I did a bit of google search for things to do for the next morning at Jeypore before proceeding on our journey ahead.

After waking up on the next morning, we realized that the inhouse restaurant at the hotel was going to open late that day. Even at 08.00.a.m., the rest of the city too seemed to be still sleeping. We couldn’t find any place to have our breakfast and the most important meal for us to keep us going for the whole day. While we were randomly driving around the city in search of food, we could not spot a single shop that was open for anything else apart from farm fresh vegetables and fish being sold by the tribal folk from the surrounding villages on the roadside. Someone suggested us to visit the Jagannath Mandir to serve dual purpose. One, it would be good to visit a temple on the first day of the year and secondly the ‘Bhog’ could be bought at the temple and complement as our breakfast.

The suggestion seemed good to us and so we parked our car around some space and walked the streets towards the temple. It was quite surprising and interesting to see that almost all households had their front yards or doorsteps cleaned with water and decorated with rangoli designs drawn in front of their houses. And all rangolis had the wishes for a ‘happy new year-2021’ written in them. To think of, it was a traditional but a modern approach to conveying new year wishes without meeting people in times of Covid-19. But to our dismay, even the temple was shut. I’m not sure if this was closed only now to avoid people from gathering due to Covid or it was normally shut on all new years’ days. But it did seem a little weird from what I have been used to seeing- people thronging to religious places on the first day of a new year. Also, that meant we had to wait to find food or satiate our hunger with the raw veggies and fish from the streets. Anyway, that was unthinkable for us and we decided to head out of Jeypore. Although the Jeypore palace was just around, that too was closed due to some renovation work. With nothing much in particular to do in the city, we decided to proceed on the highway towards our next destination.

We stopped at least two dozen times to take photos of our car set in the empty highway and in the middle of the panoramic green scenery around. We reached Araku, our next major stop by noon for lunch. Having said that, though there is nothing much to do here, Koraput district as a whole is huge and has great potential for nature tourism in future. My first and small stint in Odisha has been a pleasant one. This trip has been an enriching one in-terms of the knowledge, experience, perspectives I have gained with respect to geo-political scenario in central India, culture and demography. Indeed, a happy new year to me!

However, I found it challenging to find good food. Firstly, the towns wake up late. Secondly, large population is comfortable with street food. I found it a little uncomfortable and unhygienic. Idly and Dosa are the most common breakfast items. But for being someone who hails from the heartland of these dishes, the flavors of the Sambar and chutney was unfathomable. So, unlike all my other travel where I look out to try new and local culinary specialties, I mostly survived on fruits and biscuits for my meals during this trip.

When we reached Koraput town, we ate some fruits for our breakfast. I found a small shop selling milk and some local sweets. I bought a small portion of ‘Chenna poda’ and ‘Rasbara’, that were quite heavy for the small quantity that we ate.

For those of you who might be interested to know what landmarks are there to explore in Jeypore:
* The Jagannath temple & the Jeypore palace are the two things in the heart of the city.
* There are several waterfalls as you move towards the periphery of the town.
* Gupteshwar is a cave temple and an important pilgrimage site at a short drive towards the Chhattisgarh border.
* We stopped by at the ‘Subai group pf Jain temples’, a lesser known place with rich heritage.
* We also happened to get a little intrigued with large throttling sounds of aircrafts while we were driving on the highway, only to realize that they were the sounds of aircrafts being tested at the distant hills. HAL has its engine assembly plant around there and you can see it on your way.

Apart from these places, it is mostly the drive and the scenery that pleases you all along your way.
* There are several tribal communities inhabiting the hamlets around Jeypore, whole of Koraput and the surrounding places that may be of one’s interest in tribal culture.
* As we drove towards Araku valley, we stopped multiple times to just stand and enjoy the views, the mountain range and innumerous large lakes all along our way.

* There is also the upper and lower Kolab dams for a short getaway or a picnic.

If you are travelling with the right company, then drive slowly and enjoy the journey. 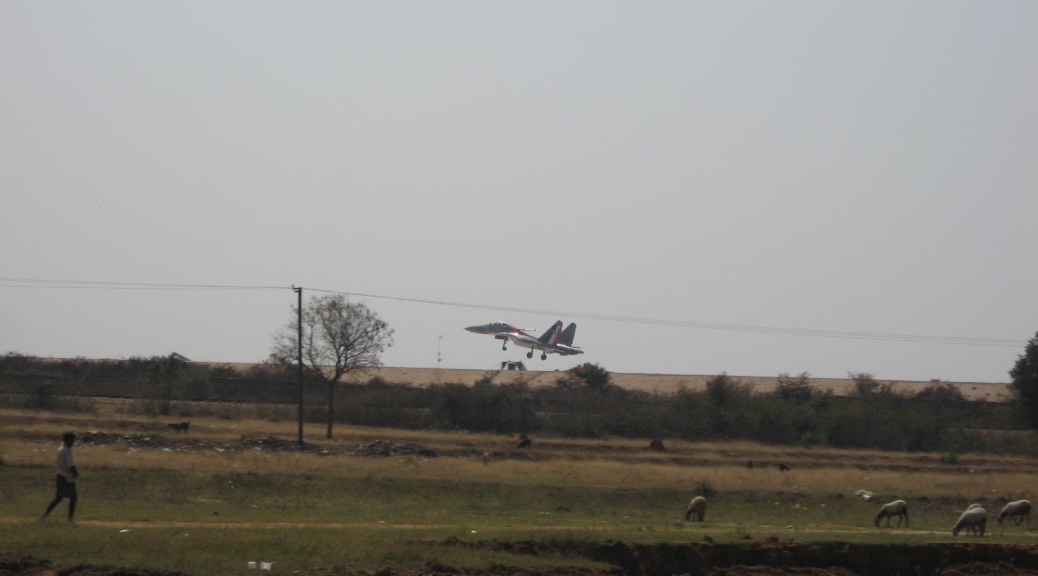 Studying at Nitte Meenakshi Institute of Technology, Bangalore (NMIT) comes with it’s own perks and privileges, outside academics. This post is a dedication to one such, to the days spent at my almamater.

It is lunch break. My gang headed towards “The Lake”- the usual hang out of the NMIT-ians. But, today was an unusual day because we were going to the lake not just to hang out, but to check out the metal birds- that have all landed on the other side of the lake. Occasion: AERO INDIA-2009.

F-16- Super viper, F-18, EuroFighter Typhoon, Su-30, Tejas, MIGs, Suryakirans, Sarangs are just a few to name. They have all been flying over our classrooms all the while. We had hardly listened to any lecture in class over the past week except for the sonic boom of these metal monsters… No arguments, This definitely is the best part of studying in NMIT. Along with the engineering lessons taught in the classroom, we all tend to develop an inquisitive approach to aeroplanes. We learn to identify the planes by their sounds and their shape while they fly past our heads all day for over a month during their rehearsals.

As we walked from college to the lake- my memories flashed back to what my eyes had witnessed that morning. My college route bus: R-13 is the only bus that flies across(literally..!!) Harohalli, “The Flying Village” route. And this route has the best country-side view enroute to college. So.. read further to know what I saw this morning..

After passing Haro-halli (literally translates to “The Flying Village” in Kannada), a little ahead- the road is lined by eucalyptus grove on one side and a high rise wall on the other. It is the Yelahanka- Airforce property beyond the wall. It took 2 minutes for my bus to reach the end of the grove. And where the grove ended, was a sight to behold. “The Lake”. It had an unusual level of water as compared to the previous years and it has small islets (or so we called them). Some migratory birds perched on the branches of the trees in those islets which enhanced the scene. Thick mist covered the water for a height of about 2 feet and then a pale layer of mist rose above in the rest of the atmosphere. On the other side of the lake, where I thought was the hedge, a Su-30: Sukhoi stood on its runway facing away from us at an angle of about 45deg. The early morning rays of the sun fell obliquely on the jet and the metal reflected it back. It looked as if the spotlight was on the protagonist on a stage.

Truly an unbelievable sight and it definitely cannot be explained by words.. But, before I could take enough of it, my bus had passed the spot and had reached the college bus-bay 😥

It’s really not required for a NMIT-ian to buy passes to see the aerobatics on the other side of the wall. We watch them always and dearly.. Seldom, these birds fly so closely over our heads that we even wave a ‘Bye’ to these pilots .. and every girl there will be drooling… 😛 There is usually a mela kind of an atmosphere around the lake with public flocking to see these peculiar birds year on year…

Tomorrow is Valentine’s day and I can’t wait for my date with the metal birds.. It’s a pleasure to be able to feel all the action at such close quarters. These are truly wonderful days of college for every NMIT-ian. Period!