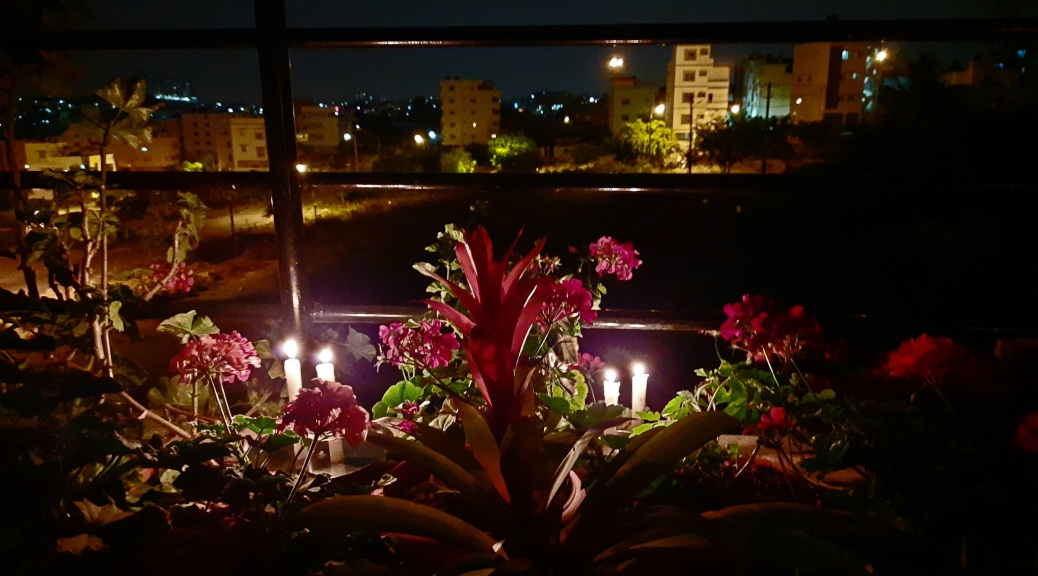 Continuing my posts on managing anxiety and keeping up self-morale during the lockdown, here’s some more on self help..

Binge-watching on Netflix, Hotstar or other OTT platforms, reading books, Cooking, meditation are so cliched. Doing these things daily too can get monotonous. Doing something for 21 days can lead to a habit. So, by the end of this lockdown period, we all don’t want to become couch potatoes..

Yes, every Sunday evening of our lockdown period has been made interesting by our Honorable Prime Minister. His tasks have made sure that we all came out to our balconies to get some fresh air and break the monotony. The clapping, clanging of plates, bells and blowing the conches from the confines of our balconies with an aim to Thank the frontline warriors of the Covid-19 Pandemic on 22-Mar-20 was a nice exercise to come out of our couches. Similarly, I’m sure the nation showed its unity and solidarity in hard times by switching off lights and lighting up lamps, candles, torches and flashlights on the evening of 05-Apr-20.

But, what about the other days of being locked down at home? Do your itchy feet rare to travel? And oh, those with little kids must be having the hardest time to keep them indoors. So, if you are looking for an offbeat travel experience to break your routine, while being locked up inside your house, here are five handpicked DIY ideas for you 😊

Sounds fair? Let me know how you are dealing with the lockdown…. What ideas do you have to experience travel without leaving your doorstep?

I’m not a political person and I don’t prefer blogging about something that can spark a political row with my writings.. But, this one goes here because I want to narrate the election campaign as seen through my eyes as a traveler traversing through a state where the election fever had hit hard! One of the most awaited elections of the country and an important one for the current ruling party of the state to prove their influence.. Uttar Pradesh State assembly elections!

Firstly, we were roaming the streets of the state capital- Lucknow. One fellow told us, “There were elephants standing at all corners and across all streets, then the cycle lanes were laid. Neither the elephants nor the cycles did any good to the city. Unemployment is an evil left over by the previous governments. Ours kids are struggling in the slush. Let us give a chance for the lotus to bloom.”

Moving ahead, we were temple hopping at Ayodhya. A local boy offered to be our guide. We were amused with the stringent security checks and the big political drama directed by man in the name of God. Just as we were talking among ourselves, our guide blatantly told- “Don’t worry, you will not have to go through all this when you are here next time. ModiJi aayenge tho sab theek hojayega! (ModiJi will resolve everything)”

The following day we were at Varanasi, the Lok Sabha constituency of Modiji himself! It was election day when we arrived there. The security was tight and with very less traffic, the spiritual city was a sight. That said, we went for a boat ride along the Ghats of the Ganges.. Explaining the history and significance of each ghat, our boatman rowed the vessel forward. In between he said- “Do you see that structure up there? Modiji aayenge tho uss Masjid ka samasya ka hal mil jayega (The issue around that mosque will be solved if Modiji wins), pointing at a mosque that is a subject of historical controversy.

It was 11th March: The D-day.. We were travelling to our next destination- Allahabad. The counting of votes was in progress and the poll trend was being aired by all news channels.. The customers in shops and hotels were glued to their TV screens.. Our fellow passengers were lost with news updates on their smartphones.. The driver and conductor of our bus caught up every now and then to get updates on the running poll trend.. Clearly, curiosity and anxiety were the only things in the air.. Everybody was discussing about who or which party would win the elections. We caught up with a conversation with our oarsman while being rowed to the confluence. He was casually talking about how he had left home to find a better job but later returned back to his family with the grace of mother Ganges et all.. And in the event, he told us that, “Mother Ganges gets more polluted on her journey forward through Banaras. But, Let us give a chance to Modiji, Ganga Zaroor Saaf hojaayegi! (Ganga will definitely become clean)”.

It is a very tough deal to commit for something as big as this, given the various religious, cultural and sentimental dimensions linked to everything that requires a change. These were not just hopes, It was an assurance given by the BJP.. It made me realize how just one man has changed the way common man looks at politics.. At any situation, we must stick to the basic morals of being an Indian- Secularism is the beauty of India! Exhibit ‘Unity in Diversity’ because the nation needs us.

And in between all the frenzy, we were waiting at Faizabad junction for our night train to Varanasi.. A train with no display board thugged slowly on Platform no.1. In the next few minutes, we were amused by looking at the platform. It was crowded with the men in uniform till as far as our eyes could reach on both ends. We saw arms and ammunitions being stacked up on the pavement and dedicated men with rifles guarding them. In a time where the entire nation was celebrating Holi, it was a strange but an overwhelming event to watch so many personnel from the armed forces who were there on duty. I hold very high regard for the defence personnel who guard us regardless of time and place. I had goose-bumps for having been in the midst of all this action. I couldn’t contain my anxiety and spoke to one of the men, while a couple of others joined in. We were told that they were from the Border Security Force (BSF) and had travelled down from Srinagar for security reasons during the state elections. That gave us an idea of how massive and sensitive the event of elections in UP is for whom, things are a lot peaceful and easy back in our home state- Karnataka.

Coming back to politics, declaring the party leader / Ministerial candidate before elections is a normal way to attract votes from the public based on various other parameters. In contrary to this style, having fielded no chief ministerial candidate; the BJP (Bharatiya Janata Party) has managed to win the great battle with just the name of one man- ModiJi! A sweeping victory of 325 /403 votes that has pushed the entire nation into amazement. Now, that the lotus has bloomed, whether the fragrance of the flower or the stench of the drainage would spread is left for the citizen to watch..

Follow The Lost Lander on WordPress.com
Join 2,639 other followers